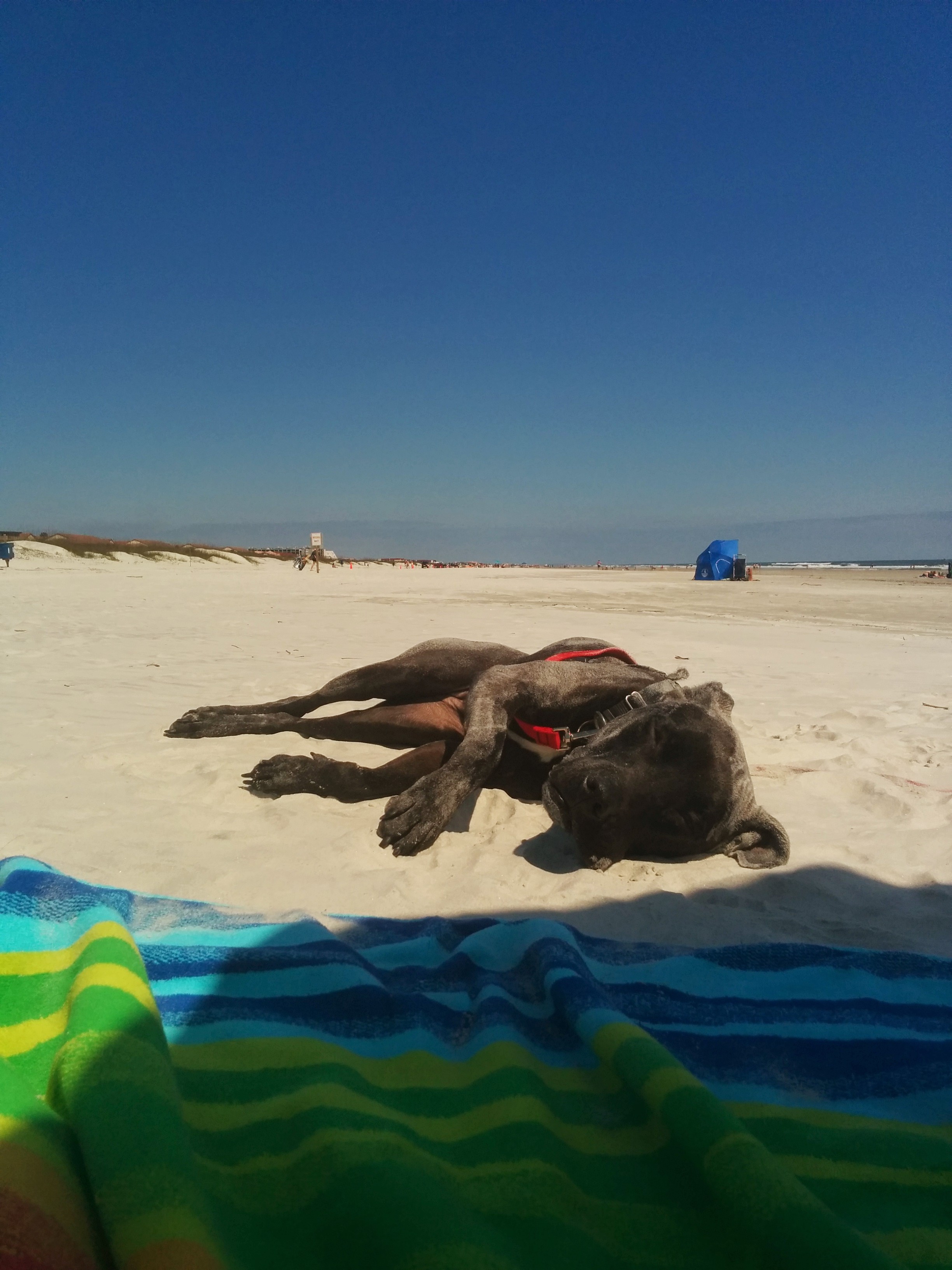 We took a winter and spring break trip to Florida this year… the reason for this? We needed warm weather and sunshine and boy did we get it!!

The winter trip was just over a week long and we stayed near Crystal River outside Tampa, Florida. We wanted to have the rest of the finishing touches promised by Lazy Days. It didn’t go smoothly and we basically wasted our time. But rather than dwell on that I’ll share about the nice little spot where we stayed. Crystal Isles RV Resort was a nice spot for us. We stayed in the back of the park, and the site next to us was completely empty. There were trees and a picnic bench and it was a nice spot! Unfortunately, I had pneumonia, but I loved the site so much I was happy to lay around in our hammock and just chill for most of the day. The pool and whatnot looked nice, but I was sick so I avoided most public areas. There was a new owner and they seem to be trying to make improvements. The water access is only for a few sites and they seemed to be long term residents.

The food we loved here was at a small Italian Restaurant, La Casa di Norma. We were here for Christmas dinner and the food was awesome and it seemed as if only family worked here. The plaza is pretty ugly, but the small dining room was warmly decorated with holiday cheer and the food was AWESOME!! We had vegetarian lasagna, which melted in our mouths, delicious coffee and Key lime for desert. If we re ever in this area again, we will be back!

The second trip was to the opposite coast. We stayed just outside of St Augustine, Florida at Bryn Mawr Ocean Resort. We LOVED it! Here’s what we said on Trip Advisor: This was one of the nicest places we’ve stayed. We have a 35 foot RV. The site we were on was a cement pad and had a small patio space and a large covered deck. The community is quiet and we liked that there were not tons of kids riding around in golf carts (we like kids, but not in golf carts). Others posted that they disliked the “permanent” homes but we found them to be pretty well kept and each unique depending on rental or the owner. Honestly that’s what set this park apart from the others we’ve stayed at. There is a good sense of welcoming community here. We never use many amenities… There is a heated pool as well as hot tub in one area and a large pool in another area. The dog play area is very large, with shaded and sunny areas. We walked our dogs many times a day and were greeted with smiles and hellos throughout. The beach gates are easy to access with a simple code (three roman numerals and printed on the flier we received at check in) and the ease of getting on and off the beach made our trip such great fun. The beach itself is very wide and allows dogs. Just beautiful!

We also liked it so much we booked for next spring break!!! Looking forward to going back.

We loved the RV park, Mount Pocono Campground, because it backed to a public nature trail with a cool old stone house and a stream. There were also little ponds where dogs are able to swim (except our dogs don’t like water).

We went for a hike at the local state park and enjoyed the cool weather and sunshine.

Andrew also spent some time cleaning the RV with Wash Wax All. He spent quite a bit of time, over two days, cleaning the whole RV! But, the cool part was it required no water and really worked well to get the baked on bugs off. Andrew bought the whole package, I’m not sure how necessary that is, and used the pole and the scrubby component the most.

We really enjoyed our trip here, ate at a couple local places that were pretty good and were very careful about my gluten-free requests, had a few hikes a no drive to a short drive away, and were generally just impressed with the renovations and upkeep of Mount Pocono Campground. We marked it as a favorite on RVParky and hope to go back in the Spring or fall of 2015! 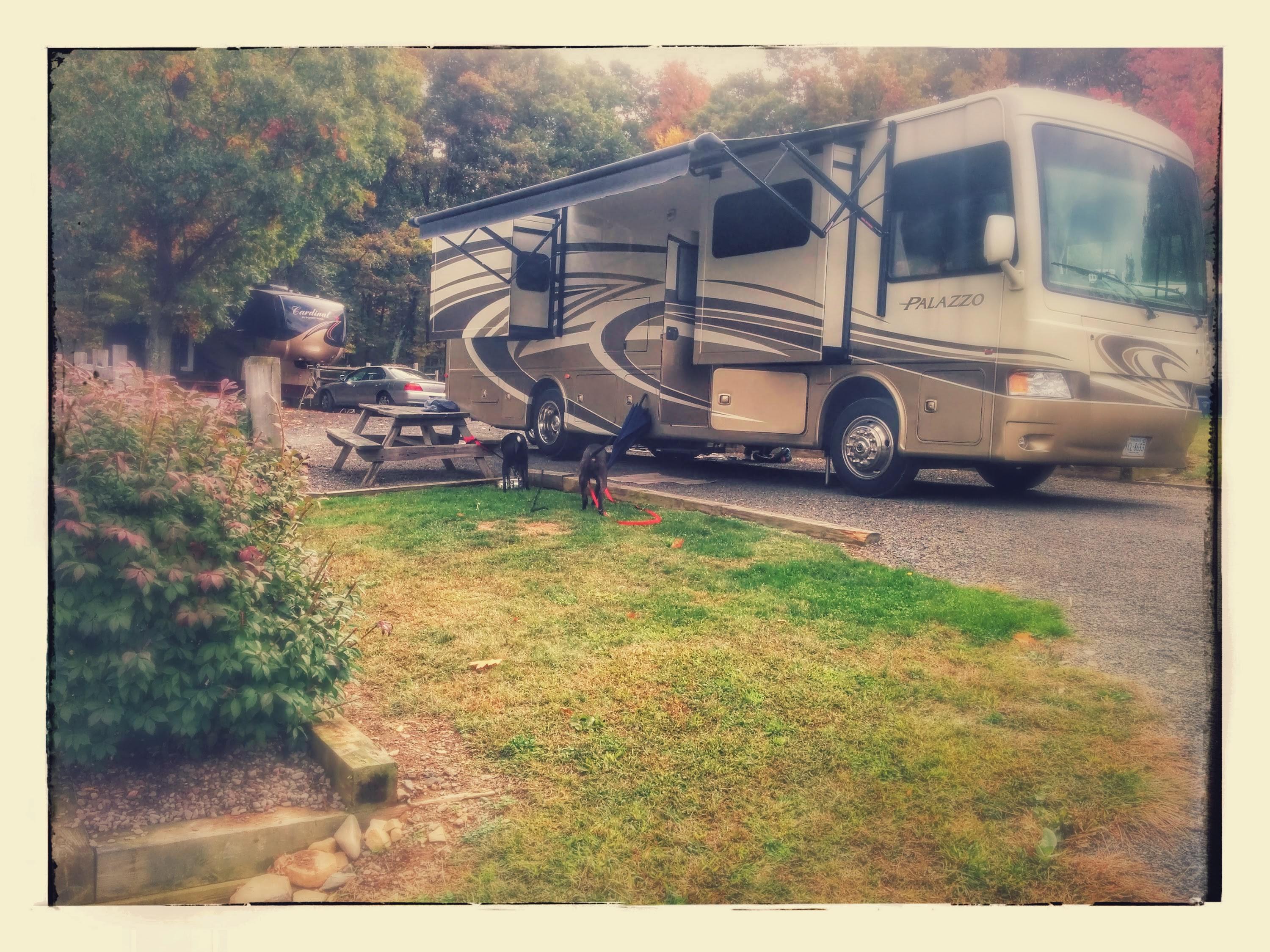 Knowing we would need to get away this fall we decided that a trip north before the snow was in order. We had never been to the Poconos and decided this could be a fun get away!

We waited till the last-minute to book, so that we could go when the leaves were near peak! We didn’t want to plan too far in advance and miss the foliage.

We packed up Thursday night, getting the RV from our storage place 40 minutes south and planned to pull out of the driveway before 4:00-the time our airbnb.com guests were checking in. As usual it was a hurried trip home and I frantically cleaned the house for the guests (we like to leave little evidence of dogs and cats)! We packed the pets and the refrigerator and drove away without incident! On a previous trip we bumped the downspout on the porch and ripped half the gutter off! Not this time. Smooth sailing.

We planned to park down from our house in front of the cement factory where their trucks sit in the street all the time. We were lucky to find space so that we could hang out and wait for the DC traffic to dissipate. We love sushi, and decided to pop down to Bonsai in Shirlinigton to get dinner and coffee from Peet’s. Once back to our RV we ate, watching the local news and then hooked up the car to the dolly. This time we took Andrew’s Hyundai Elantra since we had so much trouble with my car’s front wheels not locking and it coming un-strapped from the dolly.   We walked the dogs through our neighborhood and went on our way.

The GPS said it was a 4 hour commute, and it was, until we stopped for gas. We drove through rain for most of the trip, but without traffic it was okay. We stopped for gas once arriving near our destination. The plan was drive up late, arrive around midnight, sleep at a local Walmart, shower and whatnot in the AM and then check out a local park before checking in at the Mount Pocono Campground. Well, Andrew pumped $150 in gas, then had to call the credit card company even though we were told we no longer needed to do this.  Then he pumped the rest… got back in and turned the key-NOTHING! No lights on the dash, no sounds of a motor, nothing. He fiddled with a few things hoping it was just that he was tired and forgot something. Nothing worked. We scrambled and got out the paperwork, and found the emergency number for Thor Chassis, we called, gave them the VIN, briefly described the problems, and began receiving instructions! We were out in the rain, me holding the umbrella and the compartment door open. Andrew checking screws and pushing fuses tighter or back into place. Then back into the RV and it started! Who knew?!? Evidently the front of the RV gets power from the back which is through these little fuses. They evidently shook loose on the not so smooth highways we drive. Now we have one more thing to check before every trip! We wouldn’t want to lose power up front when we are on the highway!

So, the 4 hour trip was extended an hour and a half with the gas pump/credit card issue and then the fuse issue. After pulling out of the gas station, Pilot, we went to the closest Walmart where the app we use, RVparky, said we could park. Andrew popped in to see the manager to let her know we would be in the lot. He was told we could not park there because the police would ticket us. OKAY, there were semi trucks parked there, but we didn’t want to risk it. I called two other Walmarts each about 30 minutes away to see if we could park there. Neither was open. Then I google searched the one in Taylor, PA and a site I found had a post that someone asked a police officer in July if it was acceptable to park and he was told yes. So, we went to Taylor. It was a really nice lot to park in. It is 20 feet below the adjacent street and had a beautiful vie of the city below. It was beautiful at night (3:00 AM when we finally arrived) and more beautiful by day with the colors of the trees!

So, the four-hour trip tuned into nearly 8 hours but we are in PA, safe and sound! Now to kick back and enjoy the fall foliage!